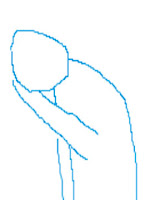 There is an Emerson quote from one of my books on the Tao that goes like this: "It is a vulgar error to suppose a man must be ready to fight." I think of all the wars of all the people and tonight I think of Vietnam and the memorial in Washington DC and I honor all who were victims of that ill fated conflict. I also think of my husband, Chuck. Before he was even issued a draft card in the late 1960's he began a long assent toward the status of conscientious objector. "One who on the basis of religious or moral principles refuses to bear arms or participate in military service to war of any kind." He had enlisted the help of priests and Quakers and a kind attorney. He filled out forms and answered innumerable questions. After two years of faithfully pursuing his goal he went before a board in the state capital and was granted, begrudgingly, the legal status that matched his conscious. He then went to Kansas City to fulfill his years of community service. Chuck and I met thirty years later. I will be visiting, very soon, the Viet Nam memorial for the first time. I do quietly think also of the young men and women who, like Chuck, served others by being present in their lives. What makes a man a man? What makes a great country great?

Welcome to the WordLayers Blog. These prose poems and pieces of written art developed out of writing practice and daily journaling. Feel free to contact me at lissalord@gmail.com with questions and comments. The website can be seen at WordLayers.com Thank you for stopping by. Lissa