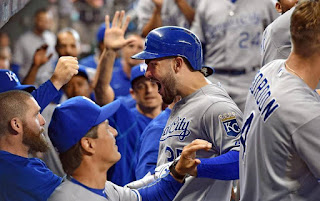 The Royals won! Most of Kansas City was simply deflated yesterday as the Royals were losing the tie-breaking series with the Astros and saying, "Good Bye" to any chance of a national championship. Then, at the very last moment of the game, in the 9th inning -- Boom -- Home Run, Eric Hosmer! And the runs started coming in with a final score of 9 - 6! Awesome. One of their slogans is "Believe in Miracles" and yesterday certainly was proof of the practicality of that. Miracles are easy. They flow and all the pieces fit smoothly and the lights turn on and you're not alone in your misery. You are together in your health with others who are cheering for that health and, as Rex Hudler says, "It's a beautiful thing!" Entering the 8th inning the Royals had a 3.2% chance of winning. The Royals were lifeless through 7 innings and then Mike Moustakas "walked into the dugout shouting about how the Royals would not lose this game. They would keep fighting, keep battling . . ." This is miracle talk, for sure. "Moments like the one the Royals gave us on Monday are a blast precisely because they come from nowhere." (Story: Kansas City Star)(Photo: John Sleezer jsleezer@kcstar.com "Kansas City Royals first baseman Eric Hosmer was welcomed into the dugout after hitting a two-run homer in the ninth inning during Monday's ALDS baseball game on October 12, 2015 at Minute Maid Park in Houston, Tex."

Welcome to the WordLayers Blog. These prose poems and pieces of written art developed out of writing practice and daily journaling. Feel free to contact me at lissalord@gmail.com with questions and comments. The website can be seen at WordLayers.com Thank you for stopping by. Lissa